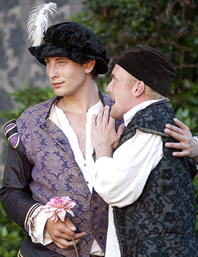 For more information on The Cambridge Shakespeare Festival Productions:

The Festival Company was established in Oxford in 1988 by Artistic Director Dr David Crilly. The main focus for the Company is the annual Cambridge Shakespeare Festival which runs throughout July and August. Situated in the gardens of the Colleges of Cambridge University, its pastoral setting is one of the loveliest in the world, and certainly it would be a difficult task to find a more appropriate and beautiful setting for the staging of Shakespeare's plays.

The Company's commitment to providing access to all to these greats works has resulted in the establishment of a programme of educational events associated with the Cambridge Shakespeare Festival. Leading up to the Festival, talks, workshops and lectures are available which introduce students of all ages to the plays which are to be performed.

Also, during the Festival, it is possible to book visiting workshops involving the actors and the director of any of the plays in the Festival. The members of the CSF will visit your school, college or language-school and introduce the play and (perhaps more importantly for overseas students) our particular production of it. In this way the students gain the greatest possible benefit from the performance which they attend. During the workshop, students may be called upon to take part in acting out one or two scenes. If preferred, it is possible to book a visit after the students have seen the production.

To book a workshop or talk, contact the Education Officer at [email protected] or call 07955 218824 to discuss your individual needs.